Avoiding Government Shutdown May Be Tied To Creating a DACA Law

On September 5, 2017, when the Trump administration rescinded DACA, the Deferred Action for Childhood Arrivals program, it sent shock waves throughout the immigrant community and caused uproar among advocates for immigration reform. Rescinding DACA put pressure on Congress to address this immigration issue by creating a legislative solution to replace the now rescinded executive action that created the DACA program.

Nearly five months after DACA was rescinded, we are now facing a potential government shutdown in which DACA may play a role. Congress was unable to pass an appropriations (budget) bill before the September 30th deadline and avoided a government shutdown by passing a Continuing Resolution (C.R.) to fund the government temporarily until December 8th. That pushed the deadline for passing an appropriations bill to the now looming December 8th date. The big news is that some congressional leaders, both Democrats and Republicans, are pushing to include a legislative solution to the DACA issue in a year-end appropriations bill.

A DACA legislative solution would put into law a program that would allow children that were brought to this country illegally, who grew up in the U.S., to remain in the country, obtain work permits, and possibly establish a path to citizenship. All indications of the potential for Congress to address this of their own initiative have not been promising. There are reports, however, that some Democrats would like to tie their votes on an appropriations bill to the creation of a law that addresses the DACA issue. This may or may not be successful depending on whether this would be agreeable to both Republicans in Congress and President Trump.

The fact that the DACA issue has not faded into the background is encouraging to immigration reform advocates and those directly or indirectly affected by the DACA rescission. For more information on DACA, read through our previous blogs on the subject:

If you have any questions, or for more information about TransACT’s Parent Notices and other products, please contact us at 425.977.2100, Option 3 or email at support@transact.com. 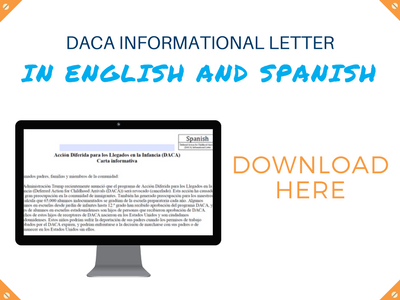