BoardOnTrack is now a part of the TransACT team! Learn more about our partnership and its impact on charter school boards.

Guest Blog: Understanding the Impact of Historical Trauma for the Education of Native American Children

As part of our commitment to provide school district administrators with resources and guidance on federal program compliance and administration, we regularly publish blogs featuring guest writers. We are honored to feature a co-written article between TransACT Executive Director of Federal Compliance and State Relationships, Dr. Holbrook, and his former colleague Keja Nokomis Whiteman, 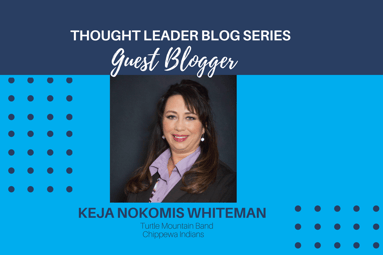 an enrolled member of the Turtle Mountain Band of Chippewa Indians discussing the importance of incorporating cultural history to support positive learning outcomes for Native Americans.

I was motivated to initiate the writing of this blog when I saw a news story via Politico about the return of the remains of four Native American children from the graveyard associated with the Carlisle Indian Industrial School, one of the boarding schools that were part of past attempts to forcibly assimilate Native Americans into the dominant American culture. The mortality rate for Native American students at this school was approximately 2%. The school operated from 1879 through 1918 and over that time period housed about 10,000 students.

Keja Nokomis Whiteman, an enrolled member of the Turtle Mountain Band of Chippewa Indians and I worked side-by-side in this effort and became trusted friends and colleagues. I reached out to Keja, who has years of experience working in various aspects of Indian education, and of whom I have the highest respect, to help in writing this article. I believe her perspective as a tribal member and someone who has worked in both K -12 systems and higher education is an important contribution to an understand of this topic.

The academic performance of Native Americans often lags behind that of other student groups. In fact, Native Americans as a group have the lowest graduation rates when compared to other student subgroups and have some of the highest achievement gaps. However, Native Americans have many positive attributes that set them apart from non-indigenous students. One positive attribute, a result of hardships suffered and extreme trauma, is resiliency. One example of resiliency is the current efforts of many tribes to promote Native language immersion schools. This is a complete shift from the decades past policy that had teachers physically swatting students for speaking their traditional language. In addition, Native American students often have indigenous knowledge associated with their culture that is not part of the dominant education systems, nor learned in the classroom, and is definitely not measured by the standardized tests administered in schools.

This indigenous knowledge is unique to individual tribes/communities. For example, in Alaska, important indigenous knowledge learned outside of school often includes survival skills. Traditional subsistence lifestyles are still practiced throughout rural Alaska and the indigenous knowledge handed down provides families with food and fuel throughout the year. These are not things that are taught nor measured through the current American educational system, but for Alaska Natives they can mean the difference between eating and going hungry or being warm and being cold. Subsistence is often not a choice but a necessity in villages where employment opportunities are limited and a gallon of milk can cost up to $16.00. Every member of the family contributes to hunting, fishing and gathering at the appropriate time of year.

The educational impact of historical trauma

One contributing factor, however, that is not often considered and almost never addressed is historical trauma. Native Americas often experience symptoms of loss or trauma as a result of generational transmission of trauma due to the treatment of Native Americans historically. Historical trauma is trauma that is transferred to subsequent generations through biological, psychological, environmental, and social means, resulting in a cross-generational cycle of trauma (Rice and Sotero). This is especially relevant for Native Americans, and even more so when one examines the policies the United States forced on Native Americans regarding education.

"For example, I heard many stories about the parents and grandparents of the Native American people I had the privilege to work among. One such story that was shared involved a man’s grandmother. When the grandmother was a little girl, she was hidden by her parents, but eventually, at nine years old, was ‘captured’ and sent to a boarding school. When she tried to run away from the school to return home, she was caught and ball & chained to her cousin so that neither could easily run off." - Dr. Holbrook

"One of the most impactful and memorable stories, shared with me related to boarding schools and historical trauma came from a grandmother with custody of several of her grandchildren. Ironically, this story took place in 2013. The grandmother was a product of the typical boarding school experience. She readily admitted struggling with her grand-kids behavior, school attendance and life in general, but became overwhelmed with grief and raw emotion when sharing her story of hiding her 5th grader grandson in her closet when the School Resource Officer showed up at her house to forcibly take him to school. She had requested help with her grandson multiple times, but the school's answer was to send law enforcement in full uniform to her home when the student had racked up the next absence.

This modern day experience was so similar to her own experience in a boarding school, she changed from wanting help with her grand-kids to full on protection mode, including flash backs of that same experience with herself as a child… only her experience also included abuse, long term removal from family, and disconnection from culture and language. Her story is not unusual, and is not an excusal of truancy, but rather it is a realization that historical trauma impacts Native American students now. It is not ancient history. This woman’s 5th grader student did not make it to school that day. He hid willingly in his grandmother’s closet until the School Resource Officer left. Eventually that student ended up being dropped by the district for non-attendance and entered the tribal court system." -Keja Nokomis Whiteman

The net result of these education policies that focused on forced assimilation is that many Native Americans lost most or all of their fluency in their native language and significant portions of their native culture. This created generations of Native Americans that suffered this loss, which was highly attributable to the educational system that was forced upon them, resulting in a significant association of a loss of language and culture with education. Many other atrocities committed against Native Americans only added to this loss and created a situation where this trauma and loss was passed down from generation to generation. The prevalence of negative attitudes toward education, among the other things mentioned above, can be directly attributable to this historical trauma.

If we, both Natives Americans and non-natives, the people who work with and establish policies for Native American children, do not know our real and accurate history, how can we make good decisions for the future of these children? Being aware of our (Native American) history and the current implications, is only the first step – now is a time for solutions to close the achievement gap and raise graduation rates for Native students.

Acknowledgement, learning about, and healing from historical trauma is a community-wide undertaking for many Native American communities across Indian Country. It is essential that school systems participate at some level. It is time for schools to assimilate to the community. This means integrating culture and language into the school. This does not mean offering a native language class as an elective. True integration and relevancy in curriculum means history, language, culture, and indigenous knowledge is woven into and embedded in the system.

Keja Nokomis Whiteman, an enrolled member of the Turtle Mountain Band of Chippewa Indians, brings a unique blend of experience with tribes, nonprofits, government and business. Currently residing in Anchorage, Alaska, Whiteman brings over twenty years of productive work with native communities. Her work has focused on community relations, legislative affairs, policy and infrastructure. Most recently, Whiteman has been working with Alaska Native Corporations. Ms. Whiteman started her professional career as a social worker advocating for children and families. Additionally she has worked in the K-12 education system, higher education and served as a consultant for the Wyoming Department of Education. Those direct, hands-on experiences lead Whiteman change her career focus to improving policy, education, economic development and systematic changes within Native communities. She has worked as an independent consultant for select projects and initiatives since 2003. Examples of clients include: tribes, national nonprofits, state and local governments, private companies and tribally owned businesses. In 2006, Ms. Whiteman was the first Native person and fourth woman ever elected in Fremont County, Wyoming as County Commissioner. Centrally located, Fremont County is the second largest (land mass) county in the lower forty eight states. Home to Wyoming’s only Indian Reservation, the county is economically supported by oil and gas development, agriculture and tourism. Ms. Whiteman successfully retained her seat through two more elections, until stepping down to relocate to Alaska in 2015. Whiteman holds a bachelor’s degree from Salish Kootenai College (Montana) and a graduate degree from the University of Wyoming. She has served her community through involvement with several nonprofit boards and community action projects, as well as a decade of service as an elected member of local school board.